I. What is Homage?

In literature, a homage is a work created in honor of something or someone, generally to show one’s respect. Writing or presenting a homage to something is called “paying homage,” and really, that can come in many forms—essentially, a homage is like a tribute, usually shown by drawing upon different aspects of whatever is being paid homage to. This might sound a bit confusing, but truly it’s not—homages are actually quite common and the idea behind them is fairly simple. Basically, think of it like this: people create things in honor of other things that they like, or create new versions of them, and that’s homage.

The word ‘homage’ actually comes from the medieval Latin term hominaticum, which was a ceremonial process of a man declaring himself to his lord (the region’s ruler). It’s recently become somewhat trendy for people to say “an (h)omage” with a silent “h”, but truly that’s more in line with French or the old Middle English pronunciation. So, just like a knight may have lain down his sword to his king to pay homage, an author pays homage with words.


II. Example of a Homage

Lollipops, gumdrops, gum balls and chocolate bars are some of the best things in the world. And let’s not forget about cakes, cookies, pies and ice cream sundaes and all kinds of delectable desserts. Ah, what would life would life be without these delicious treats; sugary and syrupy and more delicious than anything else.

Here, the author is paying homage to sweets by listing all kinds of classic desserts and treats and referencing how they make life better. However, you should note that not all homages are this direct—as this article will explain, they can take all kinds of forms

Of course, homages are important because they let authors pay tribute to significant things. But one of the biggest reasons that they are such valuable parts of literature is because they are the results of inspiration; born from drawing upon other authors and areas of literature to create entirely new works. Specifically, they reflect the idea that a single person or work of literature can be an incredible influential to both other authors and therefore literature as a whole, as homages can become great works themselves. What’s more,


John Milton’s epic poem Paradise Lost is a classic example of a homage and one of the best known works in literature. The poem is Milton’s reimagined version of the original Christian story of Adam and Eve, which pays homage to the Bible and the creation myth in general. Here is a passage from the poem that shares Milton’s story about how the snake tempted Eve:

Mother of science! now I feel thy power

Within me clear; not only to discern

Things in their causes, but to trace the ways

Of highest agents, deemed however wise.

Queen of this universe! do not believe

Those rigid threats of death: ye shall not die

Here, the snake flatters Eve and tries to convince her that nothing bad will happen if she eats the fruit from the tree of knowledge of good and evil. He wants to show people that the snake (the Devil) was truly tricky and evil, and that’s why the innocent Eve disobeyed God and ate from the tree.

The novel version of the new play Harry Potter and the Cursed Child pays homage to the original Harry Potter series with small details that fans are sure to notice. For example, in the opening scene, Harry and Ginny Potter say these words to their son Albus:

GINNY: “All you have to do is run straight at the wall between platforms 9 and 10.

HARRY: “Don’t stop and don’t be scared you’ll crash into it, that’s important. Best to do it at a run if you’re nervous.”

This imitates word for word the very same thing that Molly Weasley said to Harry Potter the first time he was going to Hogwarts in the very first book of the series. Here, Rowling and her writers are paying homage to the beginning of the story and to those first magical moments that every witch and wizard experiences.

The creators of the comedy movie Hot Fuzz pulled a lot of influence from some of their favorite action films, and they pay homage to those films in a bunch of different ways. First, the main characters watch the movies Point Break and Bad Boys II several times in the movies. Then, later in the film, the characters acting out the some of the scenes from each of the movies:

Here, we see the guys watching the movies, and then seen one of them Actually, Hot Fuzz is a homage on two levels—first, the characters pay homage to Point Break and Bay Boys II, and second, that fictional homage is actually a homage to Point Break and Bad Boys II from the writers of Hot Fuzz themselves (who also happen to be the actors portraying those two main characters!).

Season 1 Episode 20 of That ‘70s Show pays homage to Star Wars by featuring an episode about the first time it came out in theaters. Throughout the episode, the writers make references to the original film and recreate some of its elements, like the famous opening credits: 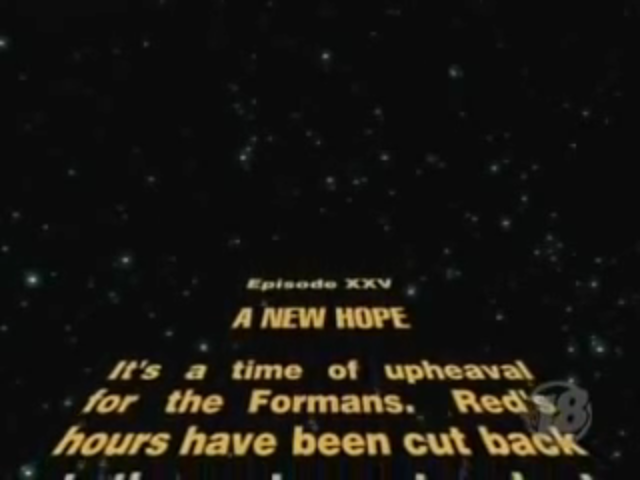 In this episode, in addition to recreating the opening sequence, they also show the gang intently watching the film in theaters. Each is a way of paying homage to the film; both through using something from Star Wars itself and by also trying to capture the thrill of seeing the movie for the first time.