I. What is an Understatement?

Understatement is when a writer presents a situation or thing as if it is less important or serious than it is in reality. It describes something with less strength than would be expected. Understatement is the opposite of hyperbole or overstatement.

There’s some water in the Atlantic Ocean. 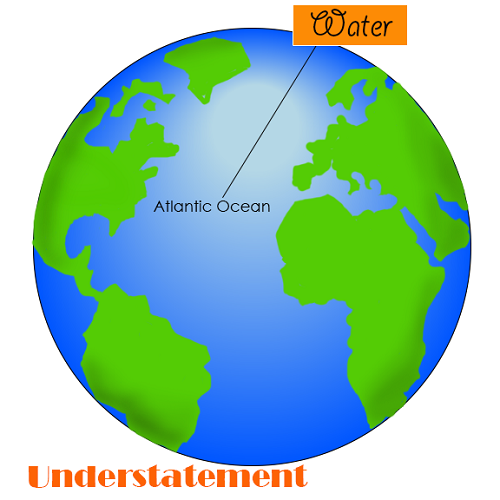 This is an understatement because the word “some” does not even begin to describe the billions of gallons of water in the Atlantic Ocean.

A camper describes the weather:

The storm brought us a little bit of rain today.

This understatement can be used to understate just how much it is raining. In the midst of a downpour, this statement would be considered funny.

A girl describes her friends:

The whale is not very thin.

This understate how something is overweight, which could be used to politely describe someone as overweight.

Imagine that your friend has just failed a test. An intense response would be:

Wow! That’s a terrible score! What are you going to do to improve your grade in the class now?

Using understatement, though, the response minimizes the magnitude of the situation:

That grade’s not so bad. It could have been worse.

Typically serious statements can become funny through the use of understatement. For example, in comedic movies, a series of unfortunate events will often happen: the once happy couple is arguing, their car breaks down, and as they get out of the car to see what’s wrong, it begins to rain heavily.

A proper response would be:

This is horrible! What else could go wrong? We have terrible luck!

A comedic understatement would be:

Looks like we’ve got a bit of trouble on our hands, huh?

After doing something amazing, it is tempting to brag or outwardly celebrate. Using understatement, though, can allow one to remain modest.

For example, upon winning a race, a prideful runner would say:

I won the race! I can’t believe I did so well!

A modest runner would use understatement to modestly accept the win:

I did pretty well. I’m happy that I improved my time.

For example, when in a heated disagreement, one may say:

I’m never going to agree with you! You’re completely wrong about this.

Using understatement, though, can allow one to remain polite:

I think we have different opinions on this subject.

IV. The importance of Understatement

V. Examples of Understatement in Literature

Understatement is used just as frequently in literature as in everyday speech, and for the same variety of effects.

For example, in “To His Coy Mistress,” Andrew Marvell understates the reality of death:

The grave’s a fine and private place,

But none, I think, do there embrace.

Here Marvell attempts to convince his lover to seize the day and enjoy life while she still can. He reminds her that there is no one to love while in a grave. While Marvell’s subject is serious, he uses understatement to lighten the statement.

In J.D. Salinger’s The Catcher in the Rye, Holden Caulfield makes a mistake that users of understatement should not to make: he understates a serious illness:

I have to have this operation. It isn’t very serious. I have this tiny little tumor on the brain.

Here, Holden is lying to a woman as to why he is leaving school early. He uses understatement after the woman expresses concern, in order to politely end an unwanted social interaction.


Understatement is a staple of comedy, especially in British humor.

For an example of understatement at work, see this famous scene from Monty Python’s The Holy Grail. In it, a knight understates his injuries:

Here are a few examples from the scene:

These comedians use understatement to make us laugh by reducing serious injuries to minor issues. An amputation which is normally a serious injury is described as “a scratch” and “flesh wound.” Likewise, a terrible defeat and the loss of four limbs is only “a draw.”

Here are a few examples from this scene:

For example, one of the most unpleasant happenings we deal with is death. Upon someone’s death, it is considered inappropriate to simply say:

A more appropriate alternative is the euphemism:

Clearly, the euphemism here is mainly used for politeness. However, understatement could be used to shield a child from the harsh truth of death. Or, it can be used to make death sound like something lighthearted or silly rather than serious.

In conclusion, understatement serves as proof of the often-used statement, “Less is more.” Understatement is a device which uses weakened descriptions for a variety of effects from making someone laugh to politely presenting uncomfortable information.