I. What is Lingo?

Lingo is language or vocabulary that is specific to a certain subject, group of people, or region; including slang and jargon. Sometimes people use the word lingo to refer to a foreign language, or, when they mean that certain language is foreign to them—it is known to one group and unknown to people outside of it. For instance, an elderly man hears some teenage boys talking about their “kicks” while showing each other their new shoes, and he might say, “I can’t understand the lingo of young kids today!”

Stemming from the Latin word lingua, meaning “tongue,” lingo refers first and foremost to speech, but it naturally carries over into literature like any spoken language does. In truth, the term lingo is relatively vague—it can mean any type of nonstandard language, and varies between professions, age groups, sexes, nationalities, ethnicities, location, and so on.


II. Example of a Lingo

Imagine a crime mystery. The main character is an American woman that is hiding her identity in a new city. She’s just arrived in New York, and she’s told everyone that this is the first time she’s ever left Texas. She speaks in a heavy southern accent, but one time, after telling a story, she says, “it was wicked cool!” Her new friend says, “did you just say ‘wicked’? Funny, I’ve only heard that lingo in New England…” Here, the author uses New England lingo as a hint that perhaps the woman isn’t who she says she is.

Lingo is a very general term that can really refer to any kind of localized language, but there are several key types of expressions that are part of lingo.

Slang is non-standard language that usually represents vocabulary related to popular culture. For example, the word “selfie” is slang for a self-taken photograph—it is a non-standard term that has become a standard in today’s social media culture. Slang typically varies greatly between age groups and social classes.

Jargon is a specific group or profession’s language that is difficult for others to understand. It includes things like medical jargon, legal jargon, tech jargon, and so on—anything that is only used amongst a very specific group.


Lingo adds personality to language by building on a group or area’s style and culture. It is constantly changing and adapting with time and trends, with new words and phrases emerging essentially every day. Any group of people can have their own lingo; the language we use often represents who we are. Often the difference between fluency and non-fluency in second language can rely on a speaker’s ability to understand and use lingo, because it shows a true understanding of a foreign language.

Like any trend, lingo can arise when an influential person uses it or coins a new phrase. The comedy, Mean Girls, uses funny slang terms to exaggerate the lives of a group of teenage girls who are at the top of the social ladder in their high school. In this clip, popular girl Gretchen tries to establish her own slang word, which can’t seem to catch on:

Gretchen is pushing for people to use “fetch” instead of “cool,” but none of her friends will use it. As you saw in this clip, Regina finally tells Gretchen that the word isn’t ever going to be popular. Gretchen’s failure to popularize “fetch” is because of her social status. She knows that had Regina—the most popular girl and the group’s leader—started using this word, it would’ve been the next big slang term at the high school.

The word “hashtag” is a noun whose meaning has evolved over the past several years and is now part of social media lingo. Hashtags (#) have become a staple for social media users across all platforms, not only as a symbol but as a spoken word. On Tonight with Jimmy Fallon, host Fallon features segments where he shares Tweets that feature a specific hashtag. Fallon chooses funny tags like #PromFail, #HowIGotDumped, #HowIQuit, #WorstAdvice, #WhyImSingle, #AwkwardDate, #MomTexts, #MomQuotes, and this segment called #DadQuotes:

In the past, a hashtag was just a symbol, but today, it’s an everyday word in social media lingo. It’s even a current TV trend to create hashtags for viewers to use in their own posts, which generates further attention for the shows, as Fallon does with segments like the one in the clip.

VI. Examples of Lingo in Literature


Mark Twain is famous for using local lingo in his novels and short stories. In his short story The Celebrated Jumping Frog of Calaveras County, Twain adds depth and perspective to his character Simon Wheeler by drawing attention to his language and manner of speech—

Why, it never made no difference to him he would bet on any thing the dangdest feller. Parson Walker’s wife laid very sick once, for a good while, and it seemed as if they warn’s going to save her; but one morning he come in, and Smiley asked how she was, and he said she was considerable better thank the Lord for his inftnit mercy and coming on so smart that, with the blessing of Providence, she’d get well yet; and Smiley, before he thought, says, “Well, I’ll risk two- and-a-half that she don’t, any way.”

A lot of the language in the above passage is confusing for readers. A phrase like “dangdest feller” is considered Southern lingo and would be difficult for a lot of people to understand. The last sentence in particular, where Smiley bets “two- and-a-half that she don’t,” is an example of local lingo that must have been common during the time Twain was writing—as readers now, we don’t know exactly how much Smiley was willing to bet.

British author JK Rowling published different versions of her Harry Potter series in the US and the UK because of the differences in American and British lingo. Below are several examples of differences from The Philosopher’s Stone, known as The Sorcerer’s Stone in the US: 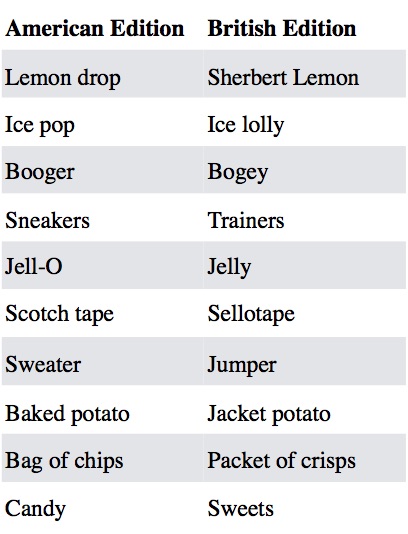 Since Harry Potter is actually a series for children, the language should be familiar and easy to understand. The success of a series can rely on the reader’s ability to relate to the characters, so Rowling and her publishers adapted the young wizards’ lingo so that it appealed to both American and British readers. For example, “booger” flavored candy is funny to American kids, but they might not understand “bogey” flavored sweets.

In conclusion, lingo is an important part of language that is always changing. It can teach us a lot about the place it comes from and express current trends, all the while adding personality and authenticity to a group of people. Without lingo, all language would be dull and commonplace.