I. What is Imagery?

Imagery is language used by poets, novelists and other writers to create images in the mind of the reader. Imagery includes figurative and metaphorical language to improve the reader’s experience through their senses.

The night was black as ever, but bright stars lit up the sky in beautiful and varied constellations which were sprinkled across the astronomical landscape.

In this example, the experience of the night sky is described in depth with color (black as ever, bright), shape (varied constellations), and pattern (sprinkled).

Silence was broken by the peal of piano keys as Shannon began practicing her concerto.

She smelled the scent of sweet hibiscus wafting through the air, its tropical smell a reminder that she was on vacation in a beautiful place.

The scent of hibiscus helps describe a scene which is relaxing, warm, and welcoming.

The candy melted in her mouth and swirls of bittersweet chocolate and slightly sweet but salty caramel blended together on her tongue.

Thanks to an in-depth description of the candy’s various flavors, the reader can almost experience the deliciousness directly.

After the long run, he collapsed in the grass with tired and burning muscles. The grass tickled his skin and sweat cooled on his brow.

In this example, imagery is used to describe the feeling of strained muscles, grass’s tickle, and sweat cooling on skin.

Here are the five most common types of imagery used in creative writing: 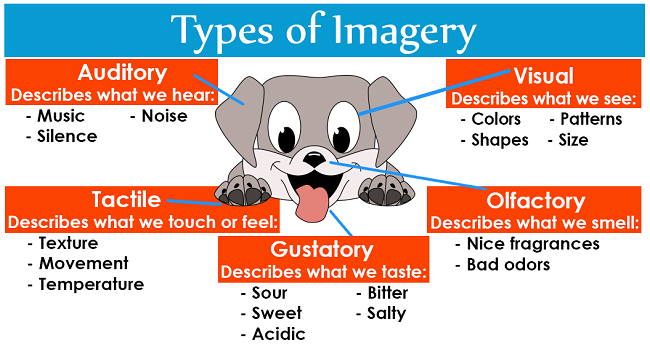 Visual imagery describes what we see: comic book images, paintings, or images directly experienced through the narrator’s eyes. Visual imagery may include:

IV. The Importance of Using Imagery


Because we experience life through our senses, a strong composition should appeal to them through the use of imagery. Descriptive imagery launches the reader into the experience of a warm spring day, scorching hot summer, crisp fall, or harsh winter. It allows readers to directly sympathize with characters and narrators as they imagine having the same sense experiences. Imagery commonly helps build compelling poetry, convincing narratives, vivid plays, well-designed film sets, and descriptive songs.

Imagery is found throughout literature in poems, plays, stories, novels, and other creative compositions. Here are a few examples of imagery in literature:

his brown skin hung in strips

and its pattern of darker brown

stained and lost through age.

This excerpt from Elizabeth Bishop’s poem “The Fish” is brimming with visual imagery. It beautifies and complicates the image of a fish that has just been caught. You can imagine the fish with tattered, dark brown skin “like ancient wallpaper” covered in barnacles, lime deposits, and sea lice. In just a few lines, Bishop mentions many colors including brown, rose, white, and green.

A taste for the miniature was one aspect of an orderly spirit. Another was a passion for secrets: in a prized varnished cabinet, a secret drawer was opened by pushing against the grain of a cleverly turned dovetail joint, and here she kept a diary locked by a clasp, and a notebook written in a code of her own invention. … An old tin petty cash box was hidden under a removable floorboard beneath her bed.

In this excerpt from Ian McEwan’s novel Atonement, we can almost feel the cabinet and its varnished texture or the joint that is specifically in a dovetail shape. We can also imagine the clasp detailing on the diary and the tin cash box that’s hidden under a floorboard. Various items are described in-depth, so much so that the reader can easily visualize them.


Imagery can be found throughout pop culture in descriptive songs, colorful plays, and in exciting movie and television scenes.

Wes Anderson is known for his colorful, imaginative, and vivid movie making. The imagery in this film is filled with detail, action, and excitement.

Louis Armstrong’s “What a Wonderful World.”

Armstrong’s classic song is an example of simple yet beautiful imagery in song. For instance, the colors are emphasized in the green trees, red blooming roses, blue skies, and white clouds from the bright day to the dark night.

Metaphor is often used as a type of imagery. Specifically, metaphor is the direct comparison of two distinct things. Here are a few examples of metaphor as imagery:

Onomatopoeia is also a common tool used for imagery. Onomatopoeia is a form of auditory imagery in which the word used sounds like the thing it describes. Here are a few examples of onomatopoeia as imagery: