I. What is a Vignette?

In literature, a vignette (pronounced vin-yet) is a short scene that captures a single moment or a defining detail about a character, idea, or other element of the story. Vignettes are mostly descriptive; in fact, they often include little or no plot detail. They are not stand-alone literary works, nor are they complete plots or narratives. Instead, vignettes are small parts of a larger work, and can only exist as pieces of a whole story.

Notably, the word vignette comes from the French vigne meaning “little vine,” and the term specifically arose for the small vines drawn on the pages of printed texts. These embellishments were commonly on title pages or a chapter’s first page, as can be seen on this page from the manuscript of Sir Gawain and the Green Knight: 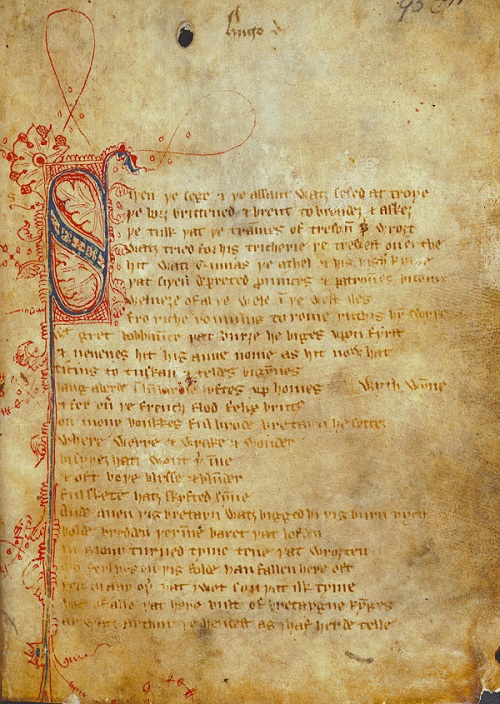 So, much like the vines on the page, vignettes are little sections of a much bigger work.

II. Example of a Vignette

A vignette should be descriptive, whether it is about a setting, a character, or another aspect of a story. Read the passage below:

The room was warm and stuffy, but in a comforting way. It had the heavy but pleasing odor of musty books and old upholstery, with an overall air of ash and cedar from the fire that was always burning low the stone hearth, crackling and spitting quietly. There was a patchwork blanket resting over the side of the sunken but cozy couch, its squares tattered by the love and wear of time. A wooden clock ticked reliably on the wall.

The vignette above uses descriptive words to paint a literary picture of a single room. On its own and out of context, this passage does not serve much of a purpose. It leaves questions like: Where is the room? Who is seeing the room? Why are they there? Whose home is it? These questions about the larger story, aren’t answered with the description. This vignette’s purpose is to add further insight about the room and to help the audience understand the setting—it doesn’t tell a complete story on its own, but rather, it provides depth to the setting of some whole story.

Vignettes are important because of their descriptive nature—they can illuminate significant information, create depth of character, or provide insight about past events or circumstances. This helps create a more complete picture of the greater story. All stories rely on vignettes to provide detail. Without them, stories would be little more than plot outlines.

IV. Examples of Vignette in Literature


Vignettes can appear in different ways; they can be a few sentences in a novel or an important scene in a movie, but most importantly, they must be descriptive. Here are some examples of vignettes in a short story and a novel.

Much of 20th century author Ernest Hemingway’s fame and renown can be attributed to his descriptive brilliance—he was a master of creating portraits of both setting and character, as he did in his short story “A Well-Lighted Café”:

It was very late and everyone had left the cafe except an old man who sat in the shadow the leaves of the tree made against the electric light. In the day time the street was dusty, but at night the dew settled the dust and the old man liked to sit late because he was deaf and now at night it was quiet and he felt the difference. The two waiters inside the cafe knew that the old man was a little drunk, and while he was a good client they knew that if he became too drunk he would leave without paying, so they kept watch on him.

Reading this opening passage creates a clear image and atmosphere in the reader’s mind—we can envision the shadow of the leaves in the light, we can feel the silence of the night, and we can imagine the intoxicated but quiet man sitting alone at the café. Hemingway doesn’t introduce the dialogue—which makes up the majority of the story—until he has employed a vignette that develops the atmosphere and feelings that he needs for the story’s success.

Sandra Cisneros’s novel The House on Mango Street is a series of vignettes that together create a portrait of life at “the house on Mango Street,” which is the protagonist’s childhood home in a low income Latino neighborhood in Chicago. A girl named Esperanza narrates the story, and each vignette in the book captures moments, memories, and observations of her everyday life on Mango Street—

The house on Mango Street is ours, and we don’t have to pay rent to anybody, or share the yard with the people downstairs, or be careful not to make too much noise, and there isn’t a landlord banging on the ceiling with a broom. But even so, it’s not the house we’d thought we’d get.

The selection is a vignette about Esperanza’s perception of the house on Mango Street. Prior to this passage Esperanza has explained that they bought the house (it isn’t a rental). The passage above provides insight to Esperanza’s thoughts about the house, which are important for the entire story. The reader knows that although the house is their own, it’s not the family’s first choice—Esperanza is grateful but disappointed at heart. This vignette exists as a piece of insight for the development of the overall image of life on Mango Street, but it is not a full story itself.

Here are some examples of vignettes showing defining moments of characters in TV and film.

The Netflix drama and comedy series Orange is the New Black uses many vignettes for characterization of the female prisoners. The vignettes are most notably in the form of flashbacks and capture relative or defining moments in the prisoners’ lives and situations that led to their imprisonment. In the show, there is a character and inmate named Suzanne who is also known as “Crazy Eyes” because of her both her erratic behavior and her wide, intense eyes.

Her flashback is a sleepover party that provides deeper insight about Suzanne’s character. Importantly, it shows that she has always been eccentric, unstable, and as a result has always been an outcast that people struggle to connect with. This remains true in prison, as exemplified by her unkind nickname.

The closing scene of the classic film Planet of the Apes is an excellent example of a vignette, particularly one that provides insight about setting—

Here, the protagonist George discovers that the planet he has been on is actually Earth, in the future, but it has been completely destroyed. Before this moment, it was unclear when or where George is in space and time, respectively. However, this vignette provides the audience (and George) with information that changes the whole perspective of the plot. On its own, this scene is irrelevant; however, it is a very relevant part of a much larger story.


A sketch is a short piece of writing—shorter than a short story—that contains little or no plot. It mainly describes people or places, and does not have to be part of a larger story. For example, a sketch of a location, like a vacation destination, would describe its most notable details. This is the primary difference between a sketch and a vignette, because a vignette is always part of a larger story or work.

In photography, a vignette technique and style in which a photo’s edges are blurred and/or darkened to bring the focus in on a certain portion of an image or scene. The term is similar to the literary definition of vignette in that it captures and emphasizes a small part of a bigger picture.

In conclusion, a vignette is a critical tool in both creative fiction and creative nonfiction because it adds depth and support to a piece of literature. It is a powerful descriptive device that can bring insight about a setting, character, or idea that adds to the overall understanding of a story.