I. What is a Melodrama?

In literature and theater, a melodrama (/ˈmel·əˌdrɑ·mə/) is a work with exaggerated, sensational events and characters. It is highly emotional, focusing on exciting but over-the-top situations that are designed to encourage emotional responses in the audience. Strong characterization is not a feature of melodrama; rather, characters are assigned stereotypical or simple roles, often in “good versus evil” situations. The genre gave life to the widely used term melodramatic, used to describe something overly dramatic or emotional. For example, if your friend was crying hysterically about breaking her new sunglasses, you’d probably tell her she was “being melodramatic.”

The term initially arose from a combination of the Greek melos, meaning “song”, and the French drame meaning “drama,” to represent its presence in theater. Originally, they were a type of musical theater, combining speech and song together on the stage. They were especially popular during the Victorian era, whose readers relished sensational characters and plotlines. In today’s media, melodrama isn’t musical, but its goal remains the same as it always has—to stir the emotions of its audience.


II. Example of a Melodrama

The top floor of the house was on fire but the bottom was flooding. The dog was barking with terror as the flames got closer and closer to him. Her husband was lying unconscious next to the dog’s cage, with a heavy wooden beam on top of him that had fallen when he went to save the dog. In one hand, the woman held her son, in the other, her daughter—her newborn twins. The only way out was to swim, and she couldn’t do that holding two helpless children—she was going to have to leave one behind.

The woman lay sobbing on top of the hill, holding her child against her chest, watching the flames in her home go out as the river swallowed the neighborhood completely. Just then, she heard a rustle behind her. She turned around and her dog came running out of the bushes, followed by her husband, holding their son in his arms.

The scene above is a classic example of melodrama—the situation is so extreme and so tragic for the main character that the audience can’t help but feel her great sadness, making it a tearjerker. Then, against all odds, nearly all of the tragedy is reversed and the best possible outcome occurs, bringing on a whole new set of emotions for the reader.

Melodrama is important because of its deep effect on its audience--viewers love drama, and melodrama delivers an abundance of it. Today, however, melodrama is sometimes criticized because of its unrealistic and sometimes laughable levels of drama. In fact, many would say that modern day soap operas and reality TV—less respected genres of television that rely heavily on over-the-top drama—evolved from the traditional genre of melodrama. Regardless, melodrama is still relatively popular in today’s media because of it never fails to entertain.

IV. Examples of Melodrama in Literature


In A Series of Unfortunate Events three children are faced with great misfortune and bad luck time after time. After the death of their parents, the orphan Baudelaire children are repeatedly and unwillingly put into dangerous, unstable situations that they barely escape. In the introduction to the first book of the series, The Bad Beginning, the narrator Snicket gives the readers a warning: 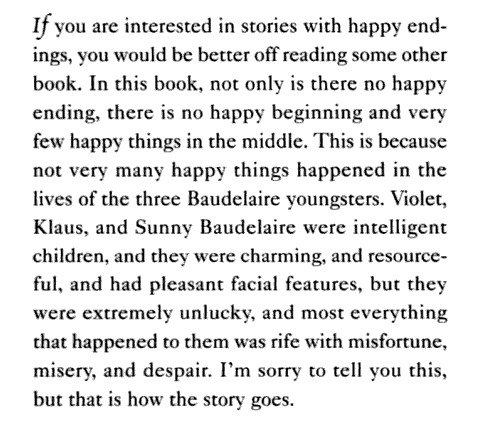 Snicket’s introduction reveals that the children’ story will not be a fairy tale. Rather, as the title it will be “a series of unfortunate events” that befall them time and time again. The stories will be so melodramatic that they won’t even include a happy ending—the Baudelaires somehow survive crisis after crisis, only to be met each time by more tragedy and misfortune.

Jean Jacques Rousseau’s play Pygmalion is one of the most influential examples of melodrama. It is an adaptation of the classic Greek myth, which tells of the sculpture Pygmalion who falls in love with his own statue, which eventually comes to life. Rousseau’s work combined music, and spoken word on stage to enhance the audience’s emotional experience. Rousseau designed his work so that his protagonist Pygmalion’s strongest emotions were expressed by deeply moving music, rather than speech. Though Rousseau’s play is rarely performed nowadays, it was one of the first examples of melodrama and had a highly influential role in the genre’s development. Below is a famous etching depicting Pygmalion and his statue Galatea, designed for Rousseau’s work by French artist Jean Michel Moreau. 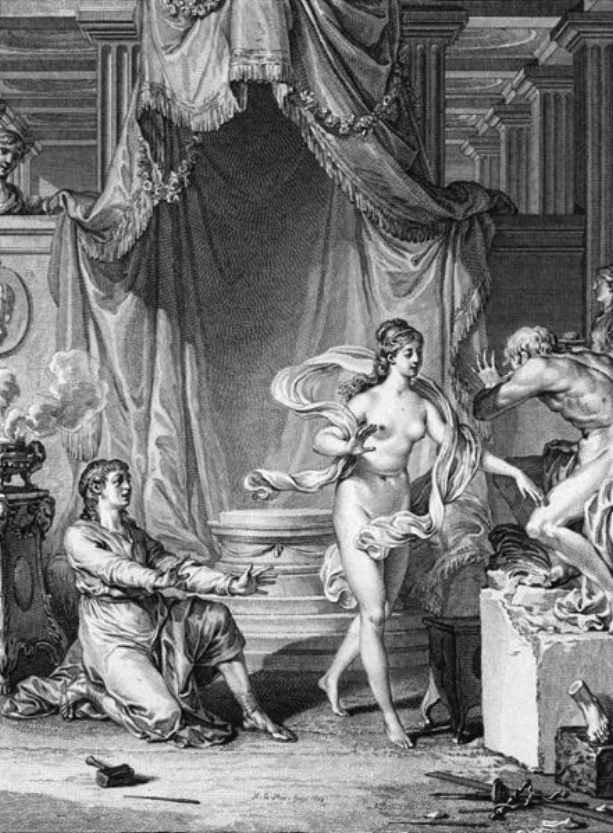 The TV series Grey’s Anatomy is known for it’s over-the-top drama, emotional speeches and tear-jerking twists. In Season 2 Episode 17, surgical intern Meredith Grey has her hand on a bomb inside a man’s body, and she’s about to hand it over to the bomb squad officer who has been by her side…

Grey's Anatomy - Bomb Episode "As we know it" season 2

Grey’s Anatomy is a modern melodrama—a highly unlikely situation like the one in the clip is an almost everyday occurrence on the show. The times that the doctors and interns are faced with life-and-death circumstances and heart-wrenching losses is unrealistically frequent. But, the show’s intention isn’t to be realistic—it’s the overemotional people and exciting action that’s been bringing the audience back for 11 seasons.

The comedy series Louie is known for its melodramatic portrayal of the main character’s (Louie’s) life. Unlike most examples of the genre, Louie sometimes uses melodrama to create humor. He over-dramatizes common, everyday situations to make the audience laugh. In Season 4 Episode 1 shows Louie being woken up by the sound of the garbage trucks:

Everything that happens in this scene is an exaggerated depiction of Louie’s reality. It shows how things seem to Louie, rather than how things actually are; a common scheme in the show. The next clip shows Louie on a bad date:

Here is another exaggeration of the show’s action. We see Louie try to kiss his date, she pulls away and suddenly a helicopter appears and she runs to it and flies away. Again we are shown a melodramatic depiction of how Louie perceives his date.


Drama is a popular genre of literature, theater, film and television that focuses on serious human emotions and conflict. It is generally considered the opposite of comedy. Melodrama is an exaggerated version of drama.

In conclusion, melodrama is a genre that never fails its main goal of bringing out a strong emotional reaction in the audience. From its beginnings on the stage to its presence in film and television today, melodrama provides sensational and embellished plotlines that viewers love to indulge in.